A new year (Chinese New Year is on Saturday, 9th February) heralds a new approach. I have ideas of things I wish to observe, record and share beginning with public works of art across Taipei (and possibly further afield, given some free time to travel) as well as graffiti. There are a few names/images I've seen in multiple locations and I wish to investigate them further.
Then, of course, there's always games. They've always been close to my heart, but I feel it's time I laid down my two cents worth, beginning today.

Mice & Mystics is the game I wish to discuss. It's brand new, having only been published last year (2012) and is a beautiful hybrid of board game and RPG.
As I'm no stranger to gaming (computer games, card games, board games, RPGs, dice games, etc) I hope I'll be able to give this a decent review. 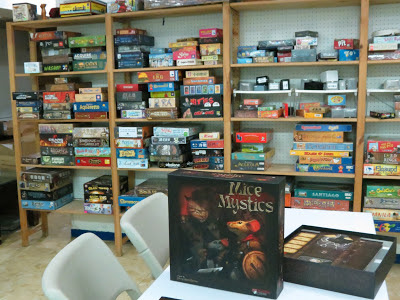 Traditionally board games are very clear cut with little to no immersion in the world in which you are playing. Thinking of games like Cluedo, Automobile and Monopoly, board games usually revolve around the idea of mathematical possibility and luck.  RPGs like Dungeons & Dragons, World of Darkness and Paranoia, on the other hand, are all focussed on the story and helping you imagine a different world. 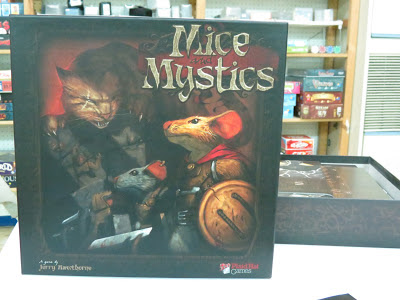 Some board games go further than others in creating a world for you to experience. Games like Outrage! and Dune went a long way to connect you to the game.
Mice & Mystics goes one step beyond, whilst still offering very smooth game-play. Playing this game I felt like I was in my very own Redwall novel. 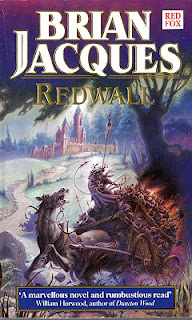 [It is at this point that I must point out that if you have never read a Redwall novel, then your childhood was sorely lacking. Read the first one, Redwall, and if you like it go on to these: Salamandastron, Outcast of Redwall and The Bellmaker.] 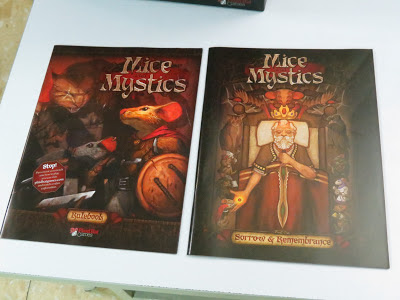 The Rulebook and Storybook
The reason why this game draws you in is because there's a story which is being followed. Along with the game there is a story book, literally telling you what happens. The prologue sets up the story:

King Andon's wife died many years ago, and he has raised his son Collin by himself (Collin's name is actually spelt wrong on the back of the box). Andon is a good man, but lonely. Then one day a queen from another land arrives to visit the king. Her name is Vanestra (not the most original, but hey). Yadda yadda yadda, the king falls in love with her, proclaims his love and then falls ill. In his weakened state he gives Vanestra authority to rule in his place. She replaces the guards with her own men and chases many people out of the castle.
Collin meets  select loyal people to plot removing the queen. They are subsequently caught and imprisoned. They use magic to turn themselves into animals to escape, but the spell is permanent. They turn into mice and slip their shackles.

From there onwards each chapter in the story is a different scenario which can be played out and playing them in order, over a series of days/weeks, can feel like playing in a campaign. These scenarios range from escaping the castle, finding allies, learning of Vanestra's secret weakness, getting back into the castle and battling everything from rats (Vanestra's minions transformed), cockroaches, spiders and the like. The game is played on double-sided tiles, each scenario using set tiles. Each scenario also has its own varying rules for different sides of various tiles, giving the game a sense of change.

The other thing I like about this game is that each level requires four characters to be played. This limits the game to a max of four players, but it also means that any number of players below that can play, with one or two people playing two characters. You can even have a one player game, with one person controlling all four mice. This means the game is flexible for the number of players, and the designers didn't have to try and create a balancing system of difficulty that changed with the number of players, as those are always difficult and tend to be imperfect.
Posted by James Shone at 6:23 PM