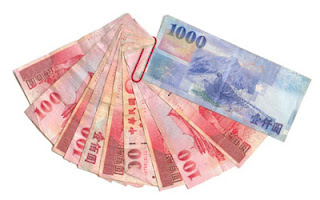 Money or, more importantly, the way money is used is most interesting in Taiwan. In the Western world it is seen as important to gather money, yet we have a strange reaction to how we show our wealth. We appear shy to reveal the actual amount of money we have, but we allow it to be expressed by the items we buy. We can drive the latest cars, live in the grandest houses and wear clothes made of the most expensive materials, but our bank balances and pay cheques are kept rigidly secret. Is it because we judge people’s worth based on the money they have?

In Taiwan there is a different approach. Money is seen as something to be used and, often, used openly. I have had a boss call across the staff room for me to collect my pay. I then sat with her as she told me the amount and asked me to count it out. This wasn't done privately and anyone in the room could hear and see.
This would never happen in South Africa. For one thing it'd make me a target for a mugging.

Tomorrow is Teachers’ Day in Taiwan and so today we were all given a small bonus. In a western country I’d have expected to be handed a sealed envelope with a thank you note and, perhaps, some money inside. Here they gave everyone money in an envelope. When I was presented with mine, I was also handed a form where I had to sign by my name to say that I’d received mine. Not only could I see that every teacher had been given the same bonus, but by signing it was clear that this was seen more as something expected of the school. The signing meant that a record was being kept. Rather than simply being a gift, it was something the school felt obligated to do.

This isn’t the first time I’ve noticed this. At Chinese New Year (which is based on the Lunar Cycle, like Easter, and takes place usually in late January or early February) children are given red envelopes with money in them from older members of the family. Once again it seems expected of people to do this.

Another thing I've noticed is that people buy presents for others when they themselves have a reason to celebrate. When one of my friend’s uncles opened a new shop, he bought presents for all of his siblings. They were fairly expensive, too; large pot plants of a variety of bamboo which can be manipulated to grow into certain shapes. The larger they are, the more expensive they become, due to the work required to shape them, and these ones were quite big. We still have it in our living room. That wasn't an independent event. Usually when a new shop opens, they have massive sales on and often give things away as well.

Posted by James Shone at 5:04 PM No comments:

A few of the classes at my school - mine included - have adopted a clip chart to use to try maintain discipline. They are modelled after the one used by Teacher Squeaks (http://teachersqueaks.blogspot.com/), though we have made some slight modifications: 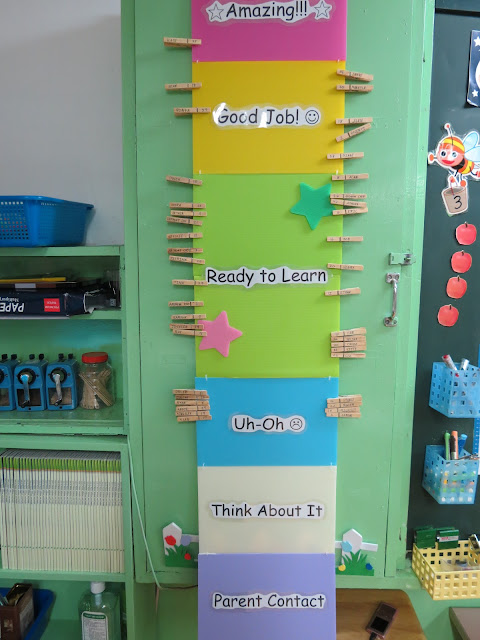 Brief overview:
All students have their names written on pegs and placed on "Ready to Learn". When they are being good, paying attention and supporting their fellow students we move their pegs up. When they are being disruptive and uncooperative, we move their pegs down. Often I will call up a student and make her/him move her/his own peg down. This reinforces the idea that s/he's done something wrong and (as I teach second language students) it gives me a moment alone with the student to ask her/him if s/he knows why s/he's in trouble - sometimes there are communication problems, rather than students being deliberately naughty.

Whilst Teacher Squeak's version had only two levels below Ready to Learn, we've made three. The point of this is to encourage students to realise when they're making mistakes, as well as giving them time to recover from it. "Uh-Oh" is there to let them know they're doing the wrong thing, and "Think About It" literally means that. If they remain on that level at the end of a lesson then they are not allowed to enjoy the break between lessons. Instead they have to sit with their heads on their desks and think about their behaviour. "Parent Contact" is reserved for those students who just don't care. For students who remain on this level for a day or two (or who are there at the end of the week) I write in their communication books which go home to their parents. Unless there is a major problem with the child, I just write about how the student is doing, where they can improve and advice for the parents in encouraging her/him to focus more.


This all said and done, I still feel that something isn't entirely right with the methods of discipline I, and many other teachers, use. I've been reading a lot about positive reinforcement lately, and I find that most of the reinforcement used at schools (this clip chart, for example) have a combination of positive and negative reinforcement. Many students don't seem to care when they are in trouble and, if they get used to it, expect to be in trouble and so have little motivation to try harder. What students (indeed, children in general) hate is being left out. I've been contemplating a system where good students are rewarded, while bad students just get nothing, but get to see what the good students are enjoying. That kind of exclusion makes children want to be involved, as the rewards aren't based upon marks or grades (which not all can achieve) but upon behaviour, discipline and the will to try. To properly implement a system like that requires the knowledge of what it is that the children want and then selling it to them, with them paying for it in the way they act. I'll get back to you on this, once I find out what it is that drives my students (besides the obvious of sweets, cake and less homework).

I hope to be able to tie my new system into the growing realm of gamification - the concept of gamifying education. It's a brilliant notion and here's a link to one of the best people to have it explained to you by:

After much pestering by various friends I have finally decided to create a blog to tell of my experiences both as a teacher and as a South African living in Taiwan. This is the extension of a mass email I've been sending to family and friends over the past two years. This is an attempt for my stories, and indeed my experiences and accumulating knowledge, to reach further afield. Hopefully I can pass on information which will be entertaining, as well as helpful to some.

The first thing I must point out, living in Taibei, is that the English (or rather, the Western) version of the name is wrong. The name is formed using two Chinese characters, which are:

Tai, meaning of the Taiwanese people, and

The spelling of Taipei with a "p" refers back to Western interaction with Asia and people creating their own spellings for the words they heard. Often Ps and Bs are mistaken for each other, as are Ls and Rs. At the mouth of the river flowing through Taibei is an area called Danshui. It was originally spelled Tamsui (I think by the Dutch) and then later changed to a more accurate spelling of the name. However, due to popular public opinion, the name has been changed back to Tamsui. Whilst being less accurate phonetically, this actually gives me hope. If the Taiwanese government is willing to listen to its people, then there may be hope for South Africa where the ANC went on a mad spree of name-changing to try and please an unsettled voting populous. With time the official names may return to the names that are actually being used by the people. But let me depart my soapbox.

After years of teaching, both in South Africa and at Taiwanese bushibans (cram schools) I have landed myself a job at a private school in the southern part of Taibei city. The school has a bilingual programme which has been running for only a few years. I am a homeroom teacher, sharing that position with a Chinese teacher. Together we look after our class (in our case, grade ones) and teach them various subjects. I have progressed from solely being an English teacher to also teaching social studies and maths. The students also receive maths lessons in Chinese, granting them a combined understanding of the material in both languages. I am quite happy with the system.
Posted by James Shone at 2:43 PM No comments: