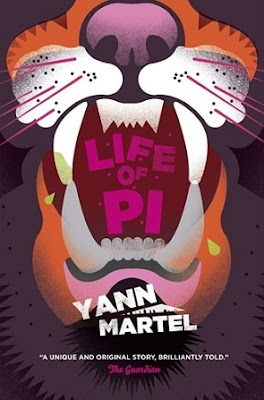 So a little while ago I read this book which I believe was quite popular even before the movie. Of course when the movie came out I went to watch it to compare the two and I must admit Ang Lee does it justice, even if he has to invent some parts of his own.
Though I enjoyed the story I found something wrong with it which I've decided to try and put into words here.

The story is about a young man (old boy) who finds himself on a lifeboat in the middle of the Pacific Ocean for about two-thirds of a year. The story is roughly split into three unequal parts. The first part is his life as a boy in India. The second is the largest part which covers his time lost at sea.The last part is very short and briefly covers his arrival back on land and his re-connection with humans.

This is where I am required to put up the mandatory SPOILER WARNING sign to anyone who has not read the book, but still wishes to. For those people - go away and read it first. Get your own opinions before considering other people's.

So Pi is our narrator and his family live in India where they are zookeepers. They decide to emigrate to Canada and so load up some of the animals onto a ship, the Tsimtsum, and sail east. On their way a massive storm sinks the ship and Pi is the only member of his family to escape onto a lifeboat. Here we meet our first peculiarity. Pi claims that the animals were free from their cages, running around the ship. 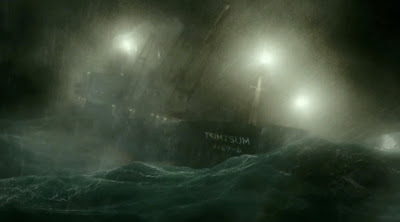 So Pi ends up on a boat with an injured zebra, an orangutan and a hyena. The hyena kills the zebra and orangutan, before being killed himself by a tiger who happened to be hiding under the tarpaulin in the bottom of the boat. Pi then has to find a way to live with this tiger for the greater part of a year, surviving on rainwater and fishing to supplement the small supply of emergency rations kept in the boat.

This sounds fantastical in and of itself, but it gets even weirder. He then tells us of his adventures at sea, including finding a floating algae island which supported trees and fish-eating meerkats. The also speaks of meeting another traveller, himself in a lifeboat from his own shipwreck floating around in the Pacific Ocean.

When he eventually reaches dry land, the tiger mysteriously disappears, leaving no proof of its existence. Some people find Pi and take him to a hospital where he is later interviewed by two Japanese men who are looking for information on what happened to the Tsimtsum and, learning that it sank, what the causes might have been. After refusing to believe the fantastical story which Pi tells them, he then succumbs to telling them another version of the story.
In this second story there were no animals loose on the ship. Instead the animals on the ship are replaced by people. The hyena is the ship's cook, the orangutan is his mother and the injured zebra is a sailor who broke his leg. The cook convinces the others they have to cut off the sailor's leg to stop gangrene, but then uses its meat to fish with. The sailor ends up dying and the cook keeps fishing with his body parts. He then gets into an argument with Pi's mother and kills her. Pi, unable to deal mentally with the situation flees to the raft (which they made to fish from) only to return later and take revenge. Pi is the tiger. 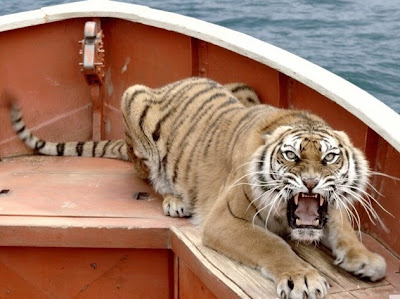 I would like to expand upon that idea. Pi is traumatised and in order to deal with the situation has to create a split personality, an alter-ego. This is the tiger and the lifeboat - the central site of his pain - becomes its domain, forcing him into exile to escape the horrific memories. 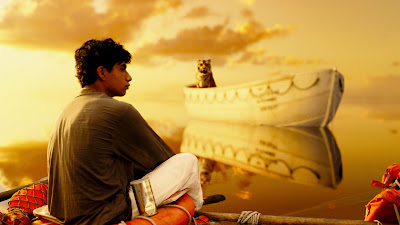 It is only when he returns to dry land and is freed from the lifeboat that he can dismiss this alternate personality. 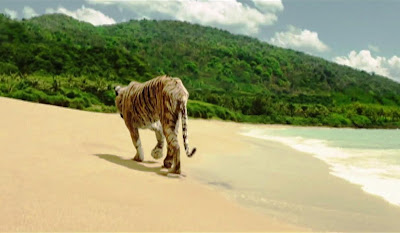 The introduction to the book gives us a promise to carry into the story. An old man in a bar (sounds like the opening to a myth) tells a writer that he knows a story that will make him believe in God. The writer then tracks down the narrator of the story in order to get the "firsthand account" of this story. What we find is something else. We do not find that we believe in God, but simply that we want to believe in God for fear of what the alternative means.

We find a lovely fantasy story designed in such a way as to supplant a true story and the true story is so horrible and tragic that we want the fantasy to be true. This, essentially, is the story of religion. Anyone who has spent enough of one's life following a religion will want desperately to hold their faith, even if their beliefs are proven to be illusions.

Posted by James Shone at 1:35 AM No comments:

For the month of may I spent my time escaping the dreaded tropical heat of Taiwan and headed home to South Africa. There my girlfriend and I took a well deserved rest from working with midget drunks children. I would like to begin by saying a word about Cape Town, the capital city of the Western Province. It is an absolutely beautiful place and (provided you ignore the three blocks of flats commonly called the Toilet Rolls) one of the nicest I've been to. It's nothing when compared to Edinburgh, but was a delicate charm perched on the coastline and surrounded by mountains. It is also the only city I know of where the city planners are so useless as to put traffic lights on a roundabout. 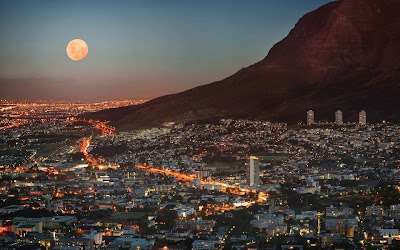 The other lovely thing about Cape Town is how much greenery they keep in the city. There's a pathway one can walk down that goes right alongside the Houses of Parliament. On the other side stretches a long, but narrow, park called the Company Gardens. This allows for all sorts of oddities, like geese in front of parliament. 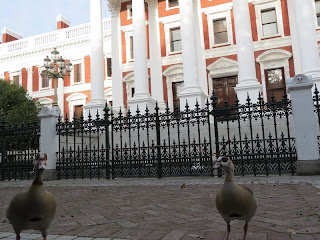 The park also hosts a number of pigeons and squirrels, including one evasive albino squirrel. Luckily I had my camera with me. 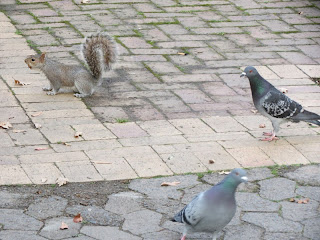 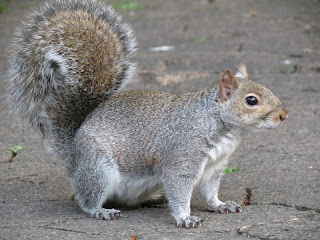 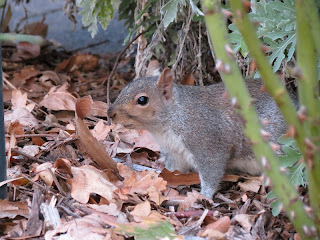 Almost looks like this squirrel is shaking his fists in anger, like a mid-fifties TV villain getting caught by the goodies. 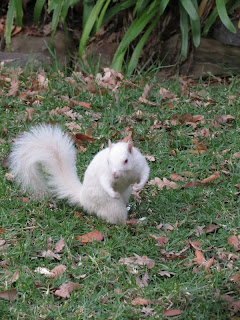 We took one day and, with a couple of friends, decided to travel out of the city to a wine farm for lunch. The countryside surrounding Cape Town is rich with vineyards and many of the wine farms offer lunches, wine-tasting, sightseeing and stalls selling farm produce.

We went to a place called Babylonstoren: Link to their website.

It's a delightful place, nestled in a valley ringed by mountains, and everything served in their lunchroom comes from the farm itself. It's a great setup they have there and I was amused by their menu. They categorised their salads according to colour and were very broad on their interpretation of the word "salad".

The green salad was the closest to normal. It had a slice of melon with gratings of apple on it, and a savory pastry which contained spinach. 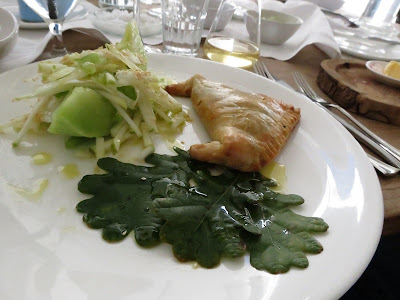 The yellow salad was more like a vegetable dish accompanying a main meal. It had bits of pumpkin and butternut, segments of tangerine and a smattering of gooseberries. 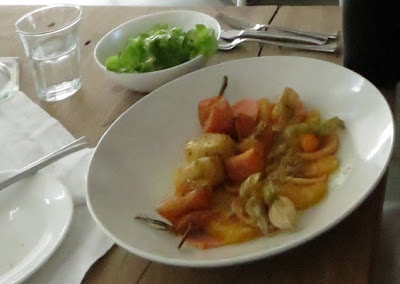 The third salad, the one I chose, was the red salad. It consisted of thin slices of beetroot and pink guava over which was scattered roasted nuts, granadilla seeds and a few edible flowers. There was also some salmon and plain yogurt. 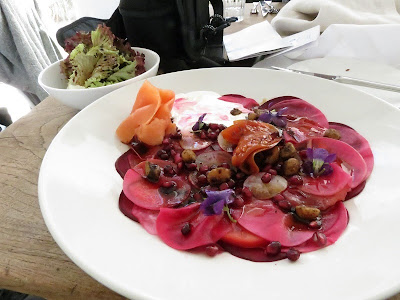 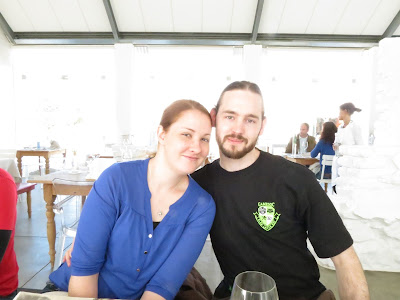 My girlfriend and I at lunch. We were playing with the camera filters and ended up being caught in a halo of shimmering light.

After lunch we spent some time wandering about the farm in what turned out was their vegetable garden. We spotted virtually everything that went into our lunch (salads, main courses and desserts) including some very large, black, speckled chickens. The scenery was delightful and the sun high, though it was a tad on the chilly side with a wind blowing. I didn't care. Frankly, I was loving the cold weather. 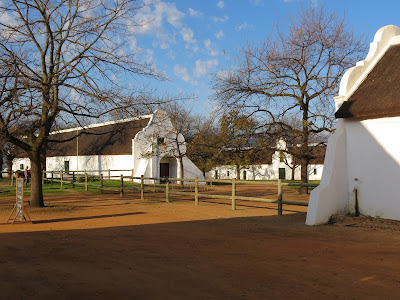 Some of the outbuildings, including stables for donkeys, and a pigeon loft in the building on the right, in the foreground. 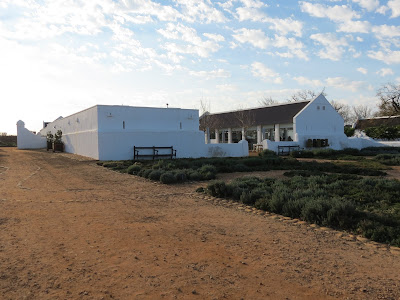 The edge of the garden section of the farm and the building in which we had lunch. 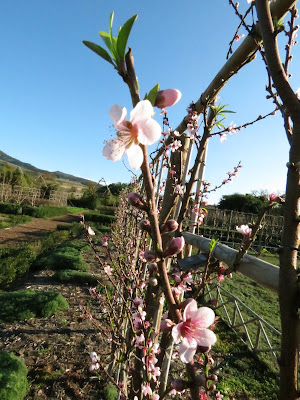 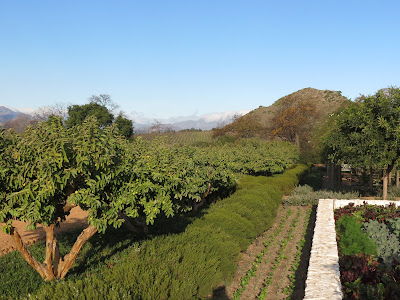 Part of the garden with mountains in the distance. 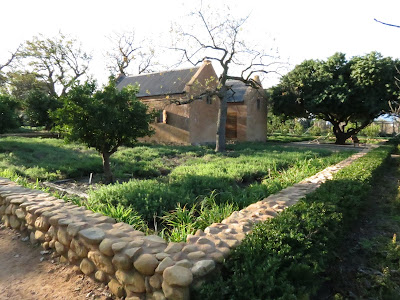 Part of the garden where both vegetables and fruit are grown. 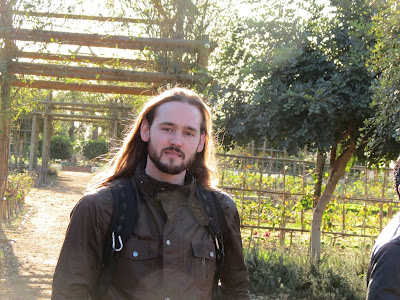 Me out in the garden. 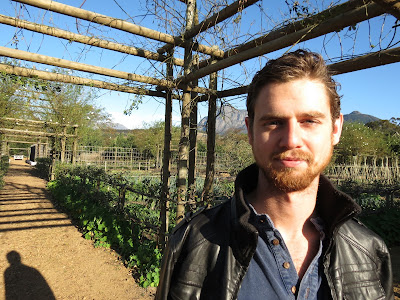 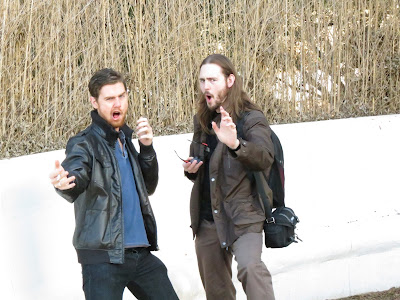 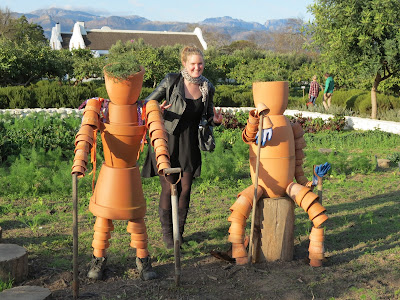 Posted by James Shone at 1:27 AM No comments: